Traffic signals are used to assign and manage right-of-way at intersections. Signals promote the orderly movement of traffic and prevent excessive delay. As technology have improved, traffic signals have moved from simple timers, where all movements can be given a specific amount of time, to on-demand systems that keep the main traffic moving until a vehicle needed to turn. Then, the signal is notified of the waiting vehicle by a detection device. Similar ssystems exist for pedestrians, but are usually accommodated with a push button detector or in recall. However, the detection device that was commonly used for heavy motor vehicles did not always detect bicycles and the cyclist was faced with the following three choices:

There are several detection methods appropriate for bicycles, including inductive loops, video, microwave radar, and push buttons. A brief description of each method is described as follows:

For a detailed description of detectors, refer to the U.S. Department of Transportation Traffic Control Systems Handbook, Chapter 6. https://ops.fhwa.dot.gov/publications/fhwahop06006/chapter_6.htm. 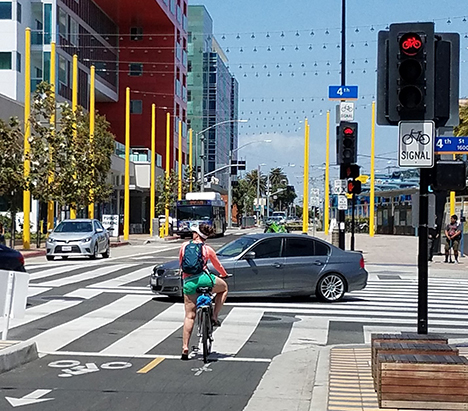 It is imperative that a detection device be included on a bicycle facility to detect waiting bicyclists and provide right-of-way indications on separated bicycle signal heads unless the bicycle signals are incorporated into a fixed time operation and automatically displayed each signal cycle. The following links provide information related to bicycle detection:

U.S. Department of Transportation, Federal Highway Administration (FHWA)
Bicycle Safety Guide and Countermeasure Selection System
The Bicycle Safety Guide and Countermeasure Selection System provides practitioners with information to improve the safety and mobility of bicyclists. The online tools offer lists of possible engineering, education, or enforcement treatments, including bicycle signals. The first link is to the program. The second link is to Bike-Activated Signal Detection. The online tools include considerations and estimated costs for bicycle signal detection.
http://www.pedbikesafe.org/BIKESAFE/