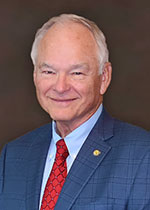 W. Hibbett Neel has served as a traffic engineer, company leader, and ITE ambassador for more than 50 years. The recipient of ITE’s Burton W. Marsh Distinguished Service Award in 2011, Hibbett is a past International President of ITE and was a co-founder and the first President of the ITE Deep South Division. Hibbett held ITE leadership positions for decades, culminating with his service as International President in 2014. He won the Deep South Section Outstanding Service Award in 2000, the Southern District Herman J. Hoose Distinguished Service Award in 1997, and the Southern Section Marble J. Hensley Individual Activity Award in 1979.

Born in Murfreesboro, TN, USA in 1941, Hibbett learned the value of hard work at an early age, rising before daylight as an 11-year-old fifth-grader to complete a morning paper route, and then by earning the prestigious rank of Eagle Scout from the Boy Scouts of America.
He earned a bachelor of engineering from Vanderbilt University in 1963 and a master of science in civil engineering from Georgia Institute of Technology in 1965. After serving three years in the U.S. Army (1965–67), where he attained the rank of Captain while serving as a Company Commander in Europe for the U.S. Army Corps of Engineers, Hibbett joined the Tennessee State Highway Department as an Assistant Traffic Engineer in 1968.

In 1971, Hibbett went to work for Hensley-Schmidt, Inc., as a project engineer in the firm’s Atlanta office. From 1972–1974, he managed the West Georgia Limited Access Highway Feasibility Study, an envisioned toll road from Chattanooga, TN, USA to Tallahassee, FL, USA. In 1974, he was named a vice president with the firm, and was transferred to Jackson, MS, USA, where he helped develop a new Hensley-Schmidt branch office. Hibbett thrived in his new environment, developing and managing a variety of transportation engineering projects that included roadway design, traffic operations and safety, transportation and transit planning, and traffic signal systems. It was also during this period that Hibbett and his wife Susan decided that after moving six times in five years for his job they would make Jackson their home.
In 1983, seeking a new challenge, Hibbett and Gorman Schaffer co-founded Neel-Schaffer, Inc., a multi-disciplined engineering, planning, and construction management firm that has grown from one office in downtown Jackson to become one of the largest private, employee-owned engineering firms in the South, with more than 500 employees working out of 38 offices across nine states. Hibbett has served as Neel-Schaffer’s President and CEO since the firm opened, in charge of strategic planning and the direction of the firm’s activities. He develops and helps to find funding for project implementation, and he is committed to ensuring that each employee has the opportunity to reach his or her professional potential.

In addition to his involvement with ITE, Hibbett is a member of the American Society of Civil Engineers, the American Council of Engineering Companies, the Transportation Research Board, and the American Public Works Association. Other service and industry awards Hibbett has won include:

Hibbett is community and civic minded, serving on more than a dozen committees and associations through the years, including the Greater Jackson Chamber Partnership, the Keep Jackson Beautiful Committee, the Mississippi Economic Council, the Advisory Committee for Jackson State University’s School of Engineering, Mississippi Blood Services, and Jackson 2000, an organization committed to racial reconciliation.