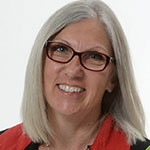 Marsha Anderson Bomar is the executive director of the Gateway85 Community Improvement District (CID), the largest CID in the state of Georgia, where her focus is on mobility, infrastructure, safety, security, and economic development. Prior to the CID, she was the founder and president of Street Smarts, Inc., a planning, engineering and design firm, and Data Smarts, a data collection and management firm, established in 1990, both of which she sold in 2010. Marsha is an International Past President of ITE and is past Chairman of ITE’s LeadershipITE, Technical Council Design Department, Policy Committee, and Transportation Planners Council. She has been the Chair of the Goods Movement Council and author of the Urban Travel Characteristics chapter of the Transportation Planning Handbook.

Marsha is featured as an Extraordinary Woman Engineer in the American Society of Civil Engineer’s (ASCE) publication, Changing Our World, True Stories of Women Engineers, and has served as President of the ASCE Transportation and Development Institute. She was Chair for the International conference, “Green Streets, Highways, and Development,” and was recently elected to the International Board as a Technical Region Governor. Marsha has received many honors and recognition for her outstanding contributions and achievements. Most recently she was awarded the ASCE William Wisely Civil Engineering Award. She was the first woman to receive the ITE Burton W. Marsh Distinguished Service Award. Marsha was named one of Atlanta Woman Magazine’s 2008 Top 25 Professional Women to Watch and was awarded the Society for Women Engineers (SWE) Entrepreneur of the Year. She was also recognized by the University of Massachusetts Amherst ITE chapter as the Jane F. Garvey Transportation Leadership Award recipient for 2009 for her outstanding leadership affecting women in transportation and remarkable contributions to the field. In 2010, Marsha received the American Council of Engineering Companies (ACEC) Community Service Award for outstanding contributions to her community and her profession. The same year she received the Karl Bevins Distinguished Service Award from the Georgia Section of ITE, which is given to recognize highly competent and professional engineers who practice in the field of traffic and/or transportation over many years. The ITE Southern District has honored Marsha with the John Edwards Individual Achievement Award and the Hensley Award.

Marsha was on the Board of Women’s Transportation Seminar (WTS) in New York City in the early 1980s and was President of the Atlanta chapter from 1986–1988. She served on the local WTS Board as well as the International Board and received the Atlanta chapter WTS Woman of the Year and WTS Employer of the Year, as well as the Leadership in Diversity award. She is currently completing her third term as Council Member, third year as Mayor Pro Tempore, and she has been elected to a fourth term for the City of Duluth, Georgia. During her time as an elected official, Marsha has created a leadership program, helped initiate and serve on the Public Arts Commission, and assisted with numerous award-winning infrastructure and development projects. She completed training from the Carl Vinson Institute of Government on Policy, Law, Ethics, Lobbying, Community and Economic Development, and Cultural Diversity and serves as an instructor for the Planning and Zoning Class.

Marsha earned a bachelor of science in mathematics and a master’s degree in transportation planning and engineering from the Polytechnic Institute of Brooklyn. She also holds a master of civil engineering from Princeton University.