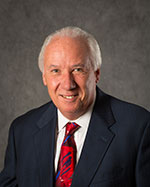 John Kennedy has been involved in the transportation industry for 45 years. He has been influential to how traffic operations function today, and his forward-thinking vision shows us what those traffic operations could look like tomorrow. John is a senior principal, and a co-founder, of VHB, an employee-owned consulting firm with more than 1,300 professionals and 24 offices along the east coast of the United States. VHB was founded in 1979 and is headquartered in Watertown, Massachusetts, USA.

John has focused his entire career on traffic operations on large-scale, high profile projects, including the award-winning Central Artery/Tunnel project in Boston, MA, USA. John remains technically active in the firm providing advice, strategic review of documents, and mentoring on a wide array of transportation projects ranging from operations and planning to design and implementation, as well as peer reviews. In addition to working with the professionals in VHB’s four Massachusetts offices, John is also involved with projects managed from offices in Florida, Virginia, Connecticut, Rhode Island, and New Hampshire.

John was most recently recognized for his significant contributions to ITE as the 2017 recipient of the Burton W. Marsh Award for Distinguished Service. He has been actively involved with ITE, serving at all levels of leadership at the Chapter (co-founder of the Massachusetts Chapter), New England Section, and Northeastern District levels, as well as on the International Board of Direction—most recently as International President in 2015. He chaired the local arrangements committee for the 1997 Annual Meeting in Boston and was co-chair when the Annual Meeting returned to Boston in 2013. John is a member and former chair of the Consultant’s Council’s Executive Committee.

While serving as ITE President, John led the search for, and selection of, a new ITE Executive Director and CEO—ITE’s first executive leadership change in more than 40 years. John oversaw the transition to the next Executive Director and helped set the course for a “new” ITE, working with the Executive Committee to lay the groundwork for a series of changes in the direction and administration of ITE. As an International Past President, John has continued to serve ITE, guiding the International Board of Direction through the development of the proposed Constitutional Amendments to broaden membership and streamline the election process. He has also been instrumental in providing strategic direction for ITE’s efforts to modernize its Trip Generation products.

John is a civil engineering graduate of Northeastern University in Boston, MA, USA. He is a registered professional engineer and member of the first class of Professional Traffic Operations Engineers.